A videó a hatékony marketing eszköz

Putting out video content isn't always easy. Maybe you're running low on ideas. Or maybe you're camera shy. Or you don't have the necessary equipment - not to mention the budget to acquire it.

Luckily, there are some handy free tools you can use.

Yep, you can make animated videos for free (minus your time investment, of course).

Check out some of the best free animation software for beginners and experts, and everyone in between.

Animaker is a free animation software for beginners, with easy drag-and-drop functionality and an intuitive interface to match. There are six core types of videos you can make with Animaker:

Including full HD support, both horizontal and vertical video layouts, and pre-made graphics to choose from, you can create fun, animated videos in no time.

Audio features include text-to-speech, the option to add background music and sound effects, and voiceover. You can choose from Animaker's library of sounds or upload your own tunes.

If you want to pay for the pro version, you can also get advanced features: in-app camera, multimove, curves, transition effects, and enter/exit effects. It's like all those PowerPoint animations except cool and not so cheesy.

Use Blender if you're looking for the best video animation software for pro editors and creators. The free open-source 3D animation tool supports the "modeling, rigging, animation, simulation, rendering, compositing and motion tracking, video editing, and 2D animation pipeline." The platform is a public project, and creatives from all over the world contribute to its ongoing maintenance.

Yeah, that's a lot. Blender is a comprehensive tool. And it's all free.

Editor's note: We also review Blender, along with 21 other video-editing tools, in this review. 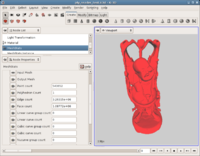 K-3D is a free 3D animation software specializing in polygonal modeling, an approach to digital graphics that represents and approximates object surfaces using polygons. Designed for artists, the software combines plugins with a visualization pipeline architecture - it adapts to the look and feel of the tools you integrate it with. 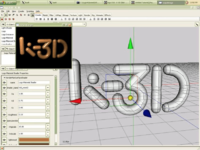 Get started with their Wiki tutorials, showing you how to master features like texturing, shadows, and symmetric modeling.

One of its best features? Easy undo/redo functionality, so you can quickly fix a mistake. Most programs only offer the option to undo an action.

With both procedural and parametric workflows, you can make adjustments and see the change immediately. A node-based visualization pipeline means editors can create connections and combinations for different elements within the video. You can work on one side of a model and mirror the other side to see what it looks like welded together.

K-3D is an advanced tool for true creatives.

OpenToonz is one of the top free animation software for 2D videos. The open-source software is free for both commercial and non-commercial use, so you can use it to create marketing videos for your brand.

It's also packed with features, such as:

You can make some pretty advanced animations with this tool.

COULD MAYBE EMBED AN EXAMPLE HERE https://twitter.com/hashtag/opentoonz some ideas:

If you run into issues using the free animation software, you can always turn to the user community or developer forum.

Pencil2D is a simple animation software you can use to create hand-drawn 2D videos. The open-source software is free for both personal and commercial use, so you can use it just for fun or to create videos to promote your products.

The interface is simple and easy to use. That, along with tons of tutorials on the website and forums you can join, makes it a great option to start with. 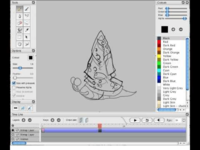 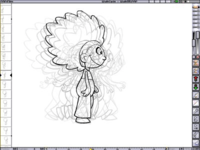 Plastic Animation Paper (PAP) is a free animation software for PC, Mac, and Linux. Though its interface is outdated, the software is completely free to download and use. Beggars can't be choosers, right? 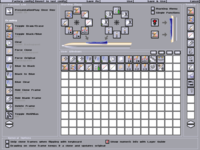 With PAP, you can create hand-drawn 2D animations, while seeing your edits in real time. The editing experience itself can be clunky, but it's easy for beginners to learn and become familiar with. It's a sufficient tool for basic animated videos.

Best suited for skilled animators, Animation Paper will help animators create 2D graphics from hand-drawn illustrations, along with a long list of features:

When you're done creating your animated video, export options include .mp4, .mov, and .png or .svg frame stacks.

The next video animation software that's free is Powtoon, meant for dynamic video presentations. While there are paid options with advanced features, Powtoon also has a stripped-down free tool for videos up to three minutes long.

In addition to what's listed above, Powtoon's free software also has:

It's a great tool for beginners, with several professional-looking templates to choose from, including animated explainer and infographic-style videos, as well as templates built specifically for product promotion. You can also start from scratch or import a theme from PowerPoint.

Stykz is one of the easiest animation software to use. With it, you can make basic 2D stick figure animated videos, like this one:

Stykz is frame-based, meaning you work on one individual frame at a time. It uses onionskins so you can see the previous frame and how to two flow together.

All edits are done within the "Stage" - in other words, you make your edits and view your changes within the same window. No toggling between views needed.

Edit one or multiple stick objects, fill shapes, and import your own stick figures. Everything will auto-save as you go, so you don't need to worry about losing all your hard work.

The next free video animation online is Synfig Studio, an open-source platform for creating 2D animated videos. With it, you use vector graphics to create timeline-based animations.

Like OpenToonz, it offers a bone system for animation controls so you can create natural movements. Create cutout animation using bitmap images or control your vector artwork, and use the additional Skeleton Distortion layer for complex deformations to bitmap artwork.

Advanced features include linking parameters for layers, allowing you to build character puppets and other advanced dynamic structures. It's certainly not made for beginners, so turn to an easier option to get started before upgrading to Synfig's advanced feature set. There are plenty of video tutorials to help you get used to the program.

Here's an example of a fun animated short created with Synfig Studio:

Google's own free animation software for Android, Toontastic 3D is meant for kids, but brands can also use it to make animated 3D videos. Ideal for storytelling, you get started with Toontastic by creating your own characters, either from scratch or based off an uploaded photo. Then it's time to insert your characters into a story.

Toontastic is meant to encourage budding storytellers to get create with their narratives, and brands can do the same. Plan your storyline, animate, add narration and music, and then export it to share it with the world.

Your storyline is based on Toontastic templates, each with a different number of scenes. Toontastic also has premade scenes to choose from, so the only "drawing" you need to do is when it comes to the characters.

If it sounds like a lot of steps, Google says you can create a one-minute video with up to six scenes in just a minute - though that doesn't include the time it takes to create your characters upfront. It also works offline so you can create videos on your daily commute or when the WiFi's out.

If you're looking for more control and creative flexibility, Toontastic isn't the best option. It's best-suited for those who are very new to the world of animated videos. Soon you'll graduate to one of the others on this list!

The best free animation software really depends on your skill level, your hardware, and the types of videos you want to make. In sum: